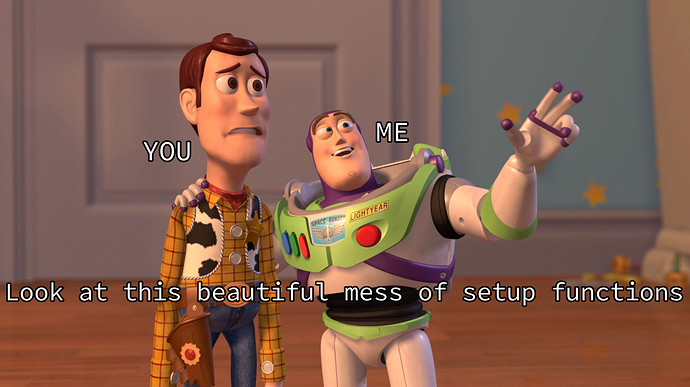 Welcome back to part 2 of this series! If you have not checked out part 1 yet please do so first as it highlights important reconnaissance steps!

So let us dive right into the IDA adventure to get a better look at how imgdecrypt operates to secure firmware integrity of recent router models.

998×471 39.5 KB
Right when loading the binary into IDA we’re greeted with a function list which is far from bad for us. Remember? In part 1 we found out the binary is supposed to be stripped from any debug symbols, which should make it tough to debug the whole thing but in the way IDA is presenting it to us it is rather nice: 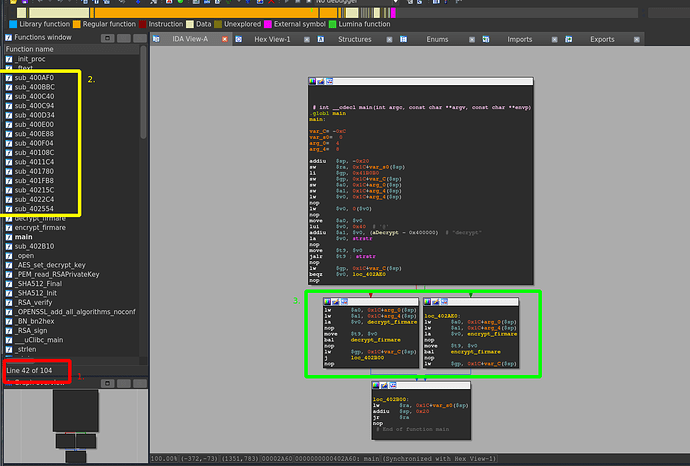 As we’re interested in the decryption for now how do we get there? Quickly annotating the main functions here leaves us with this: 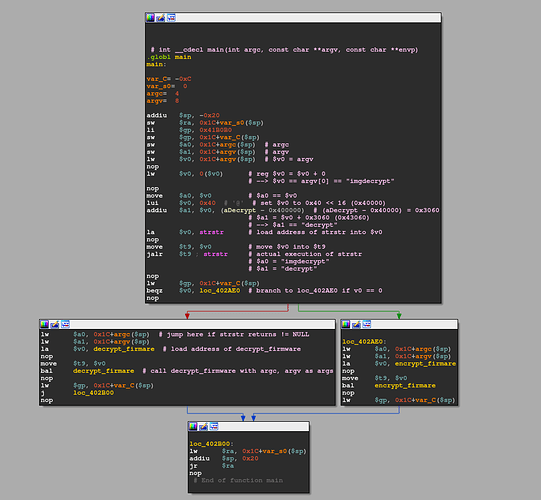 The gist here is that for us to enter the decryption part of the binary our **argv argument list has to include the substring “decrypt” . If that is not the case char *strstr(const char *haystack, const char *needle) returns NULL as it could not find the needle (“decrypt”) in the haystack (argv[0] == “imgdecrypt\0”). If NULL is returned the beqz $v0, loc_402AE0 instruction will evaluate to true and control flow is redirected to loc_402AE0 , which is the encryption part of the binary. If you do not understand why I heavily recommend to read part 1 of this series carefully and review the MIPS32 ABI.

So now we know how to reach the basic block that houses decrypt_firmware . Before entering, we should take a closer look at whether the function takes any arguments and if yes which. As you can see from the annotated version argc is loaded into $a0 and argv is loaded into $a1 , which according to the MIPS32 ABI are the registers to hold the first two function arguments! With that out of the way lets rock on! 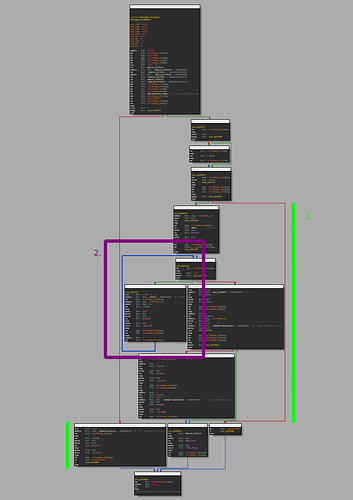 After entering the decrypt_firmware function right from how IDA groups the basic blocks in the graph view we know two things for sure:

Let’s take a look at the first part: 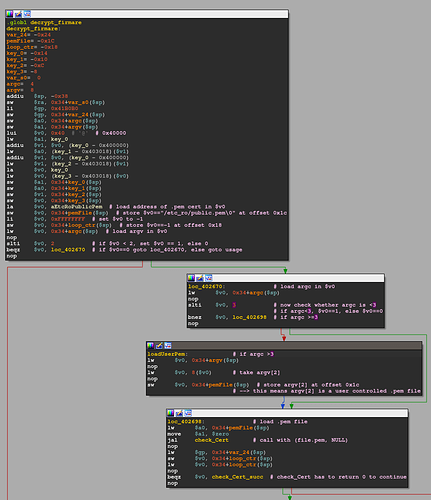 I already annotated most of the interesting parts. The handful of lw and sw instructions at the beginning are setting up the stack frame and function arguments in appropriate places. The invested reader will remember the /etc_ro/public.pem from part 1. Here in the function prologue the certificate is also set up for later usage. Besides that, there’s only one interesting check at the end where argc is loaded into $v0 and then compared against 2 via slti $v0, 2 , which in combination with the next instruction of beqz $v0, loc_402670 translates to the following C-style code snippet:

This means to properly invoke imgdecrypt we need at least one more argument (as ./imgdecrypt already means that argc is 1). This totally makes sense as we would not gain anything from invoking this binary without supplying at least an encrypted firmware image! Let’s check what the bad path we would want to avoid holds in store for us first: 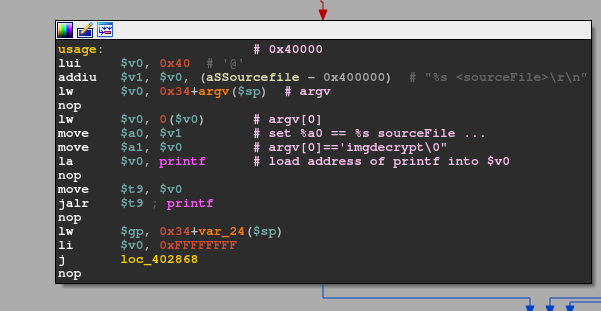 As expected the binary takes an input file, which they denote as sourceFile. This makes sense as the mode this binary operates in can either be decryption OR encryption. So back to the control flow we would want to follow. Once we made sure our argc is at least 2 there is another check against argc :

This directly translates to:

What I called loadUserPem allows a user to provide a custom certificate.pem upon invocation as it is then stored at the memory location where the default /etc_ro/public.pem would have been. As this is none of our concern for now we can happily ignore this part and move on to loc_402698 . There we directly set up a function call to something I renamed to check_cert . As usual arguments are loaded into $a0 and $a1 respectively: check_cert(pemFile, 0)

This one is pretty straightforward as it just utilizes a bunch of library functionality. 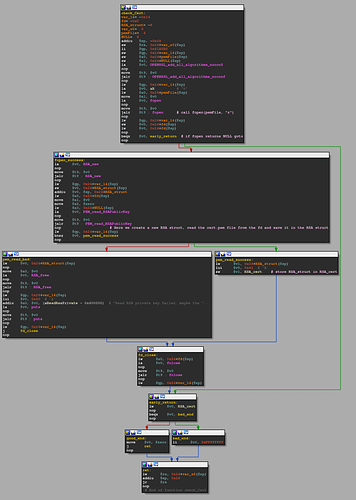 After setting up the stack frame is done it is being checked whether the provided certificate location is valid by doing a FILE *fopen(const char *pathname, const char *mode) , which returns a NULL pointer when it fails. If that would be the case the beqz $v0, early_return would evaluate to true and control flow would take the early_return path, which ultimately would end up in returning -1 from the function as lw $v0, RSA_cert; beqz $v0, bad_end would evaluate to true as the RSA_cert is not yet initialized to the point that it holds any data to pass the check against 0 .

In the case, when opening the file is successful RSA *RSA_new(void) and RSA *PEM_read_RSAPublicKey(FILE fp, RSA **x, pem_password_cb *cb, void *u) are used to fill the RSA *RSA_struct . This struct has the following field members:

Finally, these values (aka the public key) are stored in RSA_cert in memory via the sw $v1, RSA_cert instruction. Following that is only the function tear down and once the comparison in early_return yields a value != 0 our function return value in set to 0 in the good_end basic block: move $v0, $zero .

Back in decrypt_firmware the return value of check_cert is placed into memory (something I re-labeled as loop_ctr as it is reused later) and compared against 0. Only if that condition is met control flow will continue deeper into the program to check_Cert_succ . In here we directly redirect control flow to call_aes_cbc_encrypt() with key_0 as its first argument.

The function itself only acts as a wrapper, as it directly calls aes_cbc_encrypt() with 5 arguments, with the first four in registers $a0 - $a3 and the 5th one on the stack. 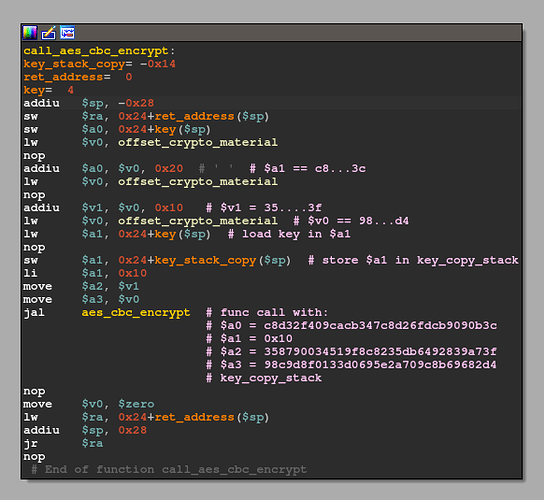 Four of the five arguments are hard coded into this binary and loaded from memory via multiple: load memory base address ( lw $v0, offset_crypto_material ) and add an offset to it ( addiu $a0, $v0, offset ) operations as they are placed directly one after another:

The first third of this function is the usual stack frame setup as it needs to properly process 5 function arguments.

‌Additionally, an AES_KEY struct that looks as follows is defined:

This is needed for the first library call to AES_set_decrypt_key(const unsigned char *userKey, const int bits, AES_KEY *key) , which configures key to decrypt userKey with the bits -bit key. In this particular case the key has a size of 0x80 (128 bit == 16 byte). Finally, AES_cbc_encrypt(const uint8_t *in, uint8_t *out, size_t len, const AES_KEY *key, uint8_t *ivec, const int enc) is called. This function encrypts (or decrypts, if enc == 0 ) len bytes from in to out . As out was an externally supplied memory address ( key_copy_stack aka the 16 byte buffer) from call_aes_cbc_encrypt the result from AES_cbc_encrypt is directly stored in memory and not used as a dedicated return value of this function. move $v0, $zero is returned instead.

Note: For anyone wondering what these lwl and lwr do there… They indicate unaligned memory access and it looks like ivec is being accessed like an array but never used after.

Anyhow, what this function essentially does is setting the decryption key from hard coded components. As a result the ’ generated’ decryption key is the same every time. We can easily script this behavior:

Once again we are now back in decrypt_firmware with fresh knowledge about having a static decryption key: 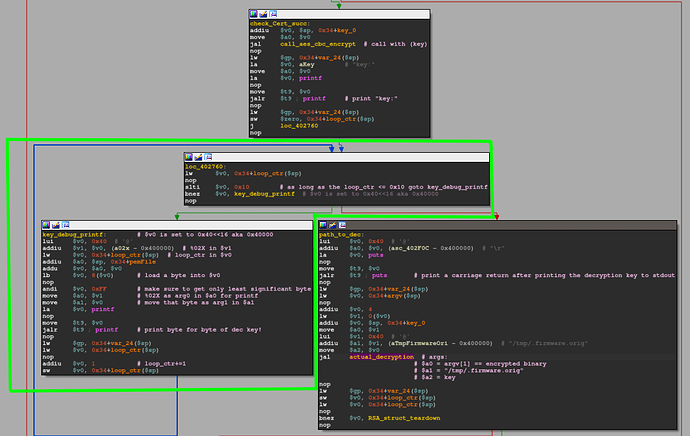 Now its getting funky. For whatever reason the binary now enters a loop construct that prints out the previously calculated decryption key. The green marked basic blocks roughly translate to the following C code snippet:

My assumption is that it may be used for internal debugging so when they e.g. change the ivec they can still quickly get their hands on the new decryption key… Once printing the decryption key to stdout is over the loop condition redirects control flow to the basic block labeled as path_to_dec where a function call to actual_decryption(argv[1], "/tmp/.firmware.orig", *key) is being prepared.

With that over and done with control flow and arguments are being prepared for a function call to something I labelled as actual_decryption .

This function is the meat holding this decryption scheme together.

This first part prepares two memory locations by initializing them with all 0s via void *memset(void *s, int c, size_t n) . I denoted these areas as buf[68] and buf[0x98] statbuf_[98] . Directly after, the function checks if the provided sourceFile in argv[1] actually exists via a call to int stat(const char *pathname, struct stat *statbuf) . The result of that one is stored within a stat struct that looks as follows:

On success (meaning pathname exists) stat returns 0. So on failure that bnez $v0, stat_fail would follow the branch to stat_fail . So we want to make sure $v0 is 0 to continue normally. The desired control flow continues here: 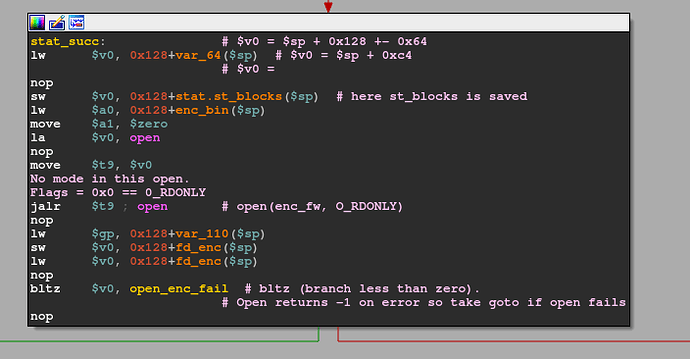 Here, besides some local variable saving the sourceFile is opened in read-only mode, indicated by the 0x0 flag provided to the open(const char *pathname, int flags) . The result/returned file descriptor of that call is saved to 0x128+fd_enc . Similar to the stat routine before it is being checked whether open(sourceFile, O_RDONLY) is successful as indicated by bltz $v0, open_enc_fail . The branch to open_enc_fail is only taken if $v0 < 0 , which is only the case when the call to open fails ( -1 is returned in this case). So assuming the open call succeeds we get to the next part with $v0 holding the open file descriptor:

Such flags can easily be extracted from the header files on any system as follows:

In this case the stat call from earlier comes in handy once again as it is not just used to verify whether the provided file in argv[1] actually exists but the statStruct also contains the struct member st_blocks which can be used to fill in the required size_t length argument in mmap ! The return value of mmap is stored in 0x128+mmap_enc_fw($sp) . Once again we have another ‘if’ condition type branching to check whether the memory mapping was successful. On success, mmap returns a pointer to the mapped area and branching on beqz $v0, mmap_fail does not take places since $v0 holds a value != 0. Following this is a final call to open:

This only tries to open the predefined path ( “/tmp/.firmware.orig” ) as read+write with the new file descriptor being saved in 0x128+fd_tmp($sp) . As usual, if the open fails branch to the fail portion of this function. On success this leads us to the final preparation step: 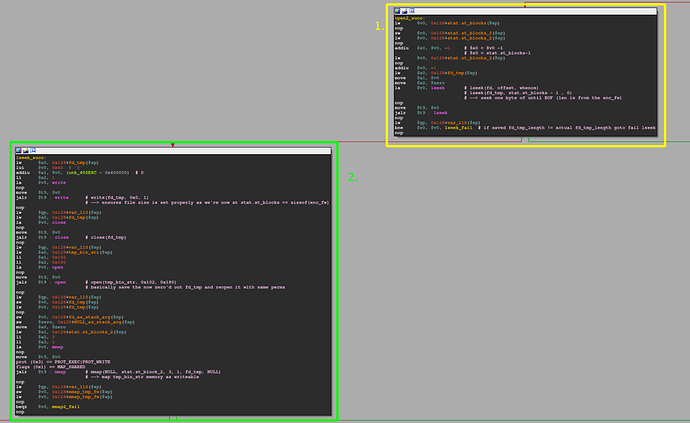 Side note : We do not need all these if-condition like checks realized through beqz, bnez, ... as we already know for sure the file exists by now…

So far we didn’t manage to dig any deeper into the decryption routine because of all this file preparation stuff. Luckily, I can tease you as much as that we’re done with that now. As we have already roughly met the 15 minute mark for the reading time I’ll stop here. The very soon upcoming 2nd part of this write-up will solely focus on the cryptographic aspects of the scheme D-Link utilizes.

If, for any reason, you weren’t able to follow properly until here you can find the whole source code up to this point below. You should be able to compile it with clang / gcc via clang/gcc -o imgdecrypt imgdecrypt.c -L/usr/local/lib -lssl -lcrypto -s on any recent Debian based system. This in particular comes in handy if you’re new to MIPS and would much more prefer looking at x86 disassembly. The x86 reversing experience should be close to the original MIPS one only with some minor deviations due to platform differences.

The next part 2.2 will be online shortly and linked here as soon as it is available.
Thanks for reading and if you have any questions or remarks feel free to hit me up :)!

fucking awsome Although I did not understand half