Buffer overflows were an earth-shattering vulnerability exploited in the late 1980’s that are protected against on modern systems. That said, they are still relevant, and pave the way to learning more advanced exploits.

This vulnerable program is implemented in C++.

What is a buffer?

Arrays allocate storage space in what is called a buffer .

All variables are stored in RAM allocated per-program in a stack frame .

How do we Exploit This?

Instead of returning exactly where our shellcode starts, we can put no operation (NOP) hex instructions (0x90) into the stack.

Now we can start trying to exploit the program! As reference, here is the source code:

To review, we know:

Here’s how I started poking around:

You can use python (or another scripting language, like perl) to run in the command line. I am telling python to print a 400 character long string of “AAAAAA…” into the terminal as an argument to our vulnerable program. The syntax for doing so is this:
python -c 'print "A"*400'
The backticks make python evaluate whatever you input before running our program.

As you can see, we get a segmentation fault at 408 characters. If you remember back to my speil earlier, we don’t want to write past the EIP, so lets check the value of the EIP by loading this crash scenario into GDB with the following command:
gdb -q --args ./escalate python -c ‘print “A”*408’`` . Then type run .

The value “A” in hex is 41, so as you can see, the EIP has not been overwritten. One good thing to note is that gdb handily tells you the EIP’s value in blue without you needing to type the info reg eip command. For the rest of the tutorial, I expect you to look at the value in blue to track with me.

Now it’s time to look at the stack to find a good return address for our exploit. The gdb command x/32z $esp will display 32 DWORDs of the stack at a time.

Hit enter to keep scrolling at this rate. You should see a ton of 41s on the stack from our input. The address I highlighted is near the top end of the buffer. It will be a good address to return to in the middle of our NOP region (refer to the earlier picture to see how we will structure this exploit). If you are following along, your address will likely be different. 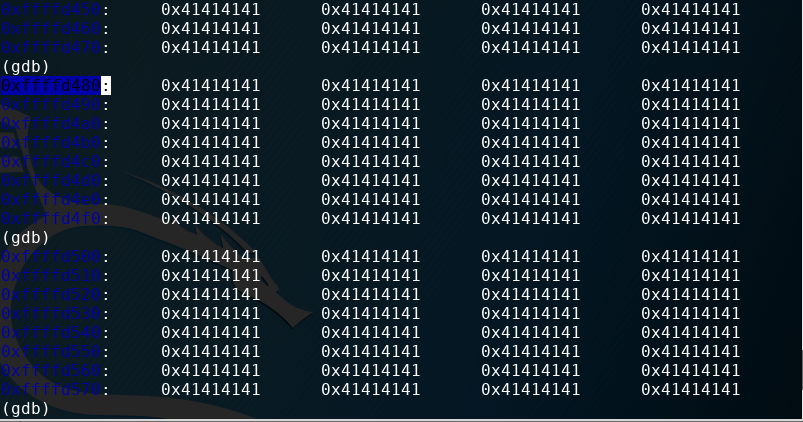 If we scroll a little farther down the stack, we see the value we overwrote the EIP with.

Now, let’s slow down a little bit and structure our attack. I don’t want to lose you in this somewhat confusing process!

The no operation (NOP) instruction is 0x90 for 64 bit Intel architecture processors.

We use \x to denote to python that the following number is a hex number instead of printable characters.
If we load this into gdb, we get the following result:

Gdb is not escalated to root permissions, so we get a user level shell (I am still the user hax). However, if we run this outside of gdb, we get a root shell instance:

It worked! The root shell is denoted by the # and I show that I can now edit the passwd file. whoami returns root as the user.

Thanks for the thorough post, assembly isn’t easy at all.

Do you have any recommendations which literature to go through? I’m currently looking at Assembly Language step by step by Duntemann, and also found a udemy course which seems interesting.

Thanks for the amazing work. You have precisely shortened the classic guide to BoF by Corelan into a crisp on point write-up!

Not OP here, but in general what can said is the following:

Regarding the 1st question:

To check the length of the buffer until R/EIP is overwritten just create a De Bruijn sequence . Then you can easily calculate the offset as shown below for an arbitrary R/EIP overwrite of for example 0xbuaaaaaa. That method is way easier than trying random buffer sizes and filling them with 'A's…

Judging from the screenshots the address 0xffffd480 is somewhere in the middle of the NOP-sled. When we can fill the buffer with NOP's plus a shellcode like in this example the following scenario is something we want:
Just return anywhere in the middle of the NOP-sled so execution continues at the shellcode as wanted. 0xffffd480 is not the only address we could have chosen but it just fits the need of being somewhere at the beginning of sled. So hitting that address with our overwritten return address guarantees us executing our shellcode.
Depending on the buffer size such an address is not arbitrary but in this scenario we would have had enough wiggle room to choose any other part of the NOP sled as well.

I hope that clears things up a bit

PS: Note that running shellcode from the stack only works when the NX-bit is not set

Wow, that’s some neat technique to calculate the offset!
Just asking out of curiosity, where did you learn this method?

Hmm, makes perfect sense now. I suppose, in case of patching a program wherein you want the program to run as expected after doing the memory-jitsu, your return address would be of much higher significance.

@pwn that’s just a small nifty technique you pick up when playing around and reading other peoples write-ups. Don’t remember where I first saw this tho

Yes you can also return to a very specific address if you got the memory perfectly laid out. The use of a NOP sled is just convenient to use if the memory region is big enough