Getting know - TCP handshake and messages

Lets get know to TCP 3 way handshake, or TCP handshake three messages,
as we know TCP is reliable and that protocol point is to deliver data successfully, and if problem occurs TCP must fix that.

so, for reliability, before TCP transmits data it will use three way handshake to estabilish a connection.

explain - for example we have Computer A and Computer B 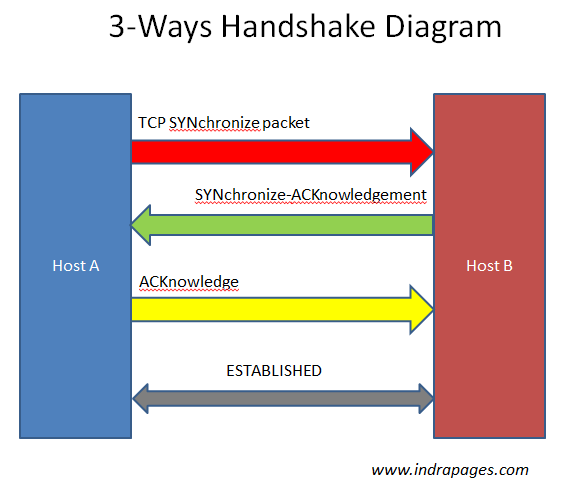 FTP,SMTP,HTTP,HTTPS,Telnet,POP3,SSH and any other protocol that works over TCP also has a three way handshake performed as connection is opened.

RFC’s are never a bad place to start : https://tools.ietf.org/html/rfc793

This is a great idea

that also known as REASON in NMAP Scans …

How do those hacking tools work? The Art of Port Scanning Networking

LEVEL: Beginner Port scanning is the process of finding out which ports are open in a given machine. An open port usually means a program listening on that port, and a program means bugs, and bugs means exploits… roughly :). OK, everybody in the world uses nmap for this task. It would be stupid to write your own port scanner when such an advanced and polished tool is available. However, knowing how nmap does its magic and also, why not?, write your own simple scanner just for fun, are two valu…

if we click any of tcp handshake packets in wireshark, below on white space we will see deep information,
we have source and destinaton ip address and ports, port 5057 is us, port 80 is webserver

TCP flags/messages, here we have only 1 or 0, 1=Set, 0=Not set
in this screenshot only one message is SET,

we have couple messages :

Synchronization (SYN) – It is used in first step of connection establishment phase or 3-way handshake process between the two hosts. Only the first packet from sender as well as receiver should have this flag set. This is used for synchronizing sequence number i.e. to tell the other end which sequence number they should except.

Reset (RST) – It is used to terminate the connection if the RST sender feels something is wrong with the TCP connection or that the conversation should not exist. It can get send from receiver side when packet is send to particular host that was not expecting it.

This problem is solved by using PSH. Transport layer sets PSH = 1 and immediately sends the segment to network layer as soon as it receives signal from application layer. Receiver transport layer, on seeing PSH = 1 immediately forwards the data to application layer.
In general, it tells the receiver to process these packets as they are received instead of buffering them.

Urgent (URG) – Data inside a segment with URG = 1 flag is forwarded to application layer immediately even if there are more data to be given to application layer. It is used to notify the receiver to process the urgent packets before processing all other packets. The receiver will be notified when all known urgent data has been received.

Port 80 was found open . This means the server would be able to complete the full 3-way handshake for this port and allow incoming connections had we actually completed it. From a server-side that means it would reply with a SYN-ACK. If we wanted to make a connection, we should have replied with an ACK. However, doing a port scan, we’re not aiming to make the full 3-way handshake so we reply with a RESET instead:

in wireshark it looks:

Nmap discovered that port 22 was closed . In this case, the SYN packet sent by the client was returned with a packet where both RESET and ACK flags are set, indicating the server was not listening on port 22 :