In the following article, I list two of the most popular ones, namely Google Search and Shodan, as well as some techniques I use to discover more attack surface. I would love to also include Github Search but my limited experience with it doesn’t allow me that. Maybe in a future article? I hope.

The use of Google Search has been increased with the time, as it is a very easy way to discover not only hidden information lying around the web but also a quicker way to identify possible vulnerable domains and endpoints.

With using Google search as a passive recon tool comes also Google dorking. Google dorking is the technique of making more specific queries to Google Search based on filters and restrictions defined by the user, so that the search engine returns more concrete results. It includes filters of the form

and logical operators between the filters

There are many filters that one can use with Google dorks. Some filters and operators that come handy when hunting for bugs:

will ask Google to return results from every subdomain of example.com known to it, except for www.example.com. This is a good query to use for additional subdomain discovery, in case your automation missed any subdomains.

Discovering technologies open to the public

Targeting specific technologies can be done through the intitle filter. The query

will return a public Jenkins instance belonging to example.com, if there is any.

In the exploit-db.com collection there is a large number of Google dorks queries for uncovering secrets and information on a target, like e.g. discovering private keys with the query

To be more creative, we can construct or own query for targeting files with sensitive inormation. Combining some of the above mentioned filters, we can come up with

where SECRET is the target secret we want to test/uncover, e.g. password and TYPE1/TYPE2 the filetype that is possible to contain such a secret, e.g. pdf or txt or ppt. Of course, both SECRET and TYPE1/TYPE2 may be depending on the target. For a company that has a billing process, SECRET may be invoice or receipt and for a, let’s say, contract reviewing company, the pdf and docx TYPE may be more possible to return any results.

Note that google dorking may return false negatives. That means that even if there is no result yielded from a query, that doesn’t mean that it doesn’t exist. Google’s search engine takes some time to update it’s search results, if the website is new or developers prevent google from crawling their website by including a noindex meta tag in the page’s HTML code, or by returning a ‘noindex’ header in the HTTP request.

There are a lot of filters and operators to use for google dorks, so here is also some other lists with the available options:

As mentioned before, you can use Google dorks to identify possible vulnerablities. While I was hunting for bugs in a target, I came across a vanilla Apache server in subdomain.target.com, where I first thought that there was no content at all. By using the very simple query

Google provided me links and relative paths of that subdomain that my wordlists missed. That led me to a web application deployed on that server, where I found an endpoint, which was vulnerable to XSS and another endpoint vulnerable to frame injection. Note that the endpoints that Google yielded weren’t included in the gau and waybackurls results.

While this requires a lot of time, one can search for possible vulnerable parameters in web applications with the inrul filter. With a list of parameters one can test the existance of those parameters, which may be possible to be vulnerable to some kind of an attack. In this case, using a list of common open redirection parameters and with the query

I found an endpoint, vulnerable to open redirection, which I then escalated to XSS.

Google is just the tool

Google is probably the most powerful search engine there is. Learning to use it to our advantage can give us an edge. It can be a great starting point when starting doing recon or it can be used as a last resort, when everything else have failed. It can even be used to find bug bounty programs to start hacking. 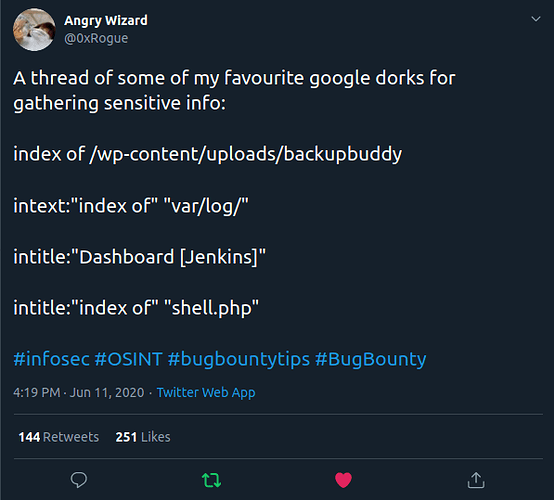 Although Shodan is a pretty known and popular I think it’s not used that often for bug hunting as it should.

Shodan is a search engine for internet-connected devices. It is a specific purpose search engine, created first as a pet project. Now it is used to aid researchers on their work. It collects information about web servers, such as open ports, services running on those ports and their banners. Making a query, let’s say “microsoft” will yield any device in shodan’s database that contains the word microsoft in its banners 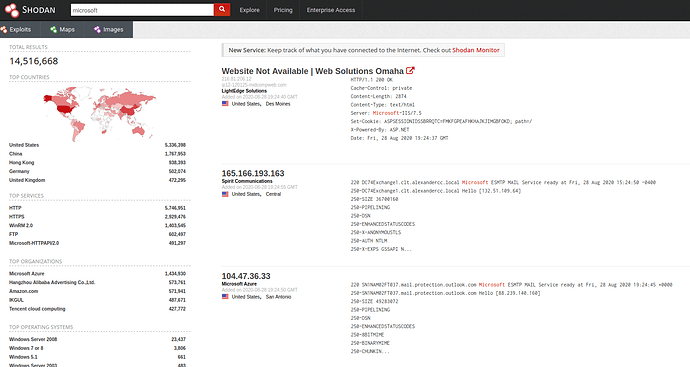 Shodan is best used with a one-time payment, where one gets access to most of it’s powers. But to use it’s specifiers (filters) you need to make a free account.

This search engine can play an important role in your bug hunting. When the scope is not strictly limited to specific subdomains and it is open enough to let you search for any server related to the organization, that’s where it shines the most.

Just like in Google, you can also make use of some filters the site provides in order to specify you query. Some of the most essentials are:

Here are resources for shodan and its filters/use.

Of course, the more filters you use in a query, the more specified the query is.

While all of the above mentioned filters are the most important for bug hunting, my personal favourite filter is the ssl. Using the ssl filter you can search for certificates issued to the organization and lets you discover servers’ IPs that are either related to the organization (loose scope) or within the scope (strict scope) but were not picked up by your recon automation tools. You can check the latter with a reverse DNS lookup of the found IPs.

Having all the above mentioned filters in our arsenal, we can start narrowing down our results to our specific target.

It is not necessary to combine a ton of filters to come to an end result. Using the simple filter

where Target is the name of the organisation, I found a number of servers whose certificates where issued to Target. Examining them one by one, while doing content discovery on one, I saw that the sensitive file web.config.txt was open in public, containing a number of SQLConnection strings, most of them related to Target. Even though there where no SQL ports open to the Internet for me to test them, I reported it and it got accepted.

On July 2020 Cisco’s Adaptive Security Appliance (ASA) Software and Firepower Threat Defense (FTD) were found vulnerable to unauthenticated file read/path traversal. The affected systems were WebVPN servers, which carried the string "Set-Cookie: webvpn;" in their banners. Restricting the search to include only servers whose SSL certificates include the organization’s name, I was able to find several servers vulnerable to CVE-2020-3452.

The ssl filter can be further used for more specific results. The SSL certificate is read by Shodan in a JSON format with this form (source):

We can parse the ssl certificate and search for a term in it. We can parse the JSON by seperating the nested JSON keys with .. To search for Common Names with the term target in it, we can use the query ssl.cert.subject.CN:target.

A technique sneakerhax showed me a while ago is looking if the target organization owns an ASN. This can not only be done in the cli but also in shodan. Like the previous case study, discovering a server vulnerable to CVE-2020-3452 within the target’s ASN can be done with the query

Important the thing here is to do an additional check on whether the server is actually owned by the target and not just hosted in their ASN. So, to do that, you can add the ssl:"Target" filter or perform a reverse DNS check on the IP and see if the domain name is within the scope.

Using the web app can be tiring and slow, so there is also the shodan cli option to get your results straight into your command line and integrate it with your pipeline and other tools. You just need to initialize it with your API Key.

As previously mentioned, using Shodan for bug bounties shines the most, when it’s combined with an open scope, where systems related to the organisation can also be reported. But, as with all tools and search engines, shodan doesn’t have every possible IP, so it might also lead to false negatives. But it’s definitely a valuable tool to use after doing your initial recon.

Using search engines for passive reconnaissance, either that is endpoint or secret or subdomain discovery, requires a lot of digging and can take some time. But when it comes to bug hunting, the more digging a bug requires the more probable it is to not be a dupe. Testing out the filters and creating unique and creative queries is the key.

thats a good trick as well , at this point i also want to introduce https://censys.io as well so that anyone following this thread can benefit from it , because censys has many searching and filtering options , especially when it comes to comes to ssl certificates , i usually endup finding some 'not so easy to discover ’ subdomains with censys.

edit: if anyone was wondering where the search page of censys is , its here https://censys.io/ipv4

I feel we need a wiki with all of these tricks indexed according to category .