In the name of Allah, the most beneficent, the most merciful.

I’ve played lots of classic games as a child, one that I particularly enjoyed was called DOOM, its concept was overly simple:

But as the saying goes: “There is beauty in simplicity”.

Those days are long gone, and although everything that surrounds me changed, I didn’t.
I guess few things never vanish.
Note: I might do things wrong, but it’s all for fun anyway

And so it all began

I started off by playing the game for a while, it reminded me of the implemented movement system.
The left/right arrow-keys allow screen rotation.
While up/down keys render forward and backward moves possible.

In order to look for the Image’s entry point, I used WinDBG and attached to Doom95.exe process.

As you may have noticed, I’m running on a 64-bit machine.
But the executable is 32-bit:

The field next to “PE\x00\x00” is called ‘Machine’, a USHORT indicating its type.
so I proceeded to switch to x86 mode using wow64exts.

I then looked-up “Doom” within loaded modules, and used $iment to extract the specified module’s entry point.

Jumping to that address in IDA reveals the function of interest: _WinMain.

The search for parts with beneficial information started.

The static WindowName used by the call will result in our fast retrieval of Doom’s PID.

The next thing that caught my eye in the _WinMain procedure were the following lines.

The function SetWindowsHookEx installs a hook(fn) within the current thread to monitor System Events. This example specifically uses an idHook that equals 2, which according to MSDN refers to WH_KEYBOARD.

The callback function has the documented KeyboardProc prototype. It captures the Virtual-Key code in wParam.
On top of that, the fn function invokes GetAsyncKeyState to check if a specific key is pressed too:

The function that handles arrow-keys is sub_442A90. 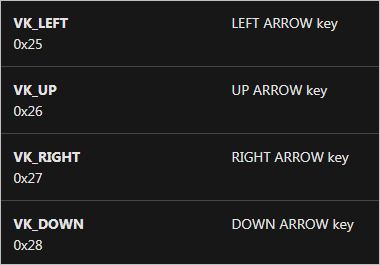 Our ignorance of the structure stored within memory puts us at a disadvantage.
In order to find where Health is mainly stored, I’ll be using Cheat Engine with the assumption that it is a DWORD(4 bytes): “\x64\x00\x00\x00”.

I’ll then proceed to get the character damaged, and ‘Next Scan’ for the new value.
We end up with 5 different pointers.

The last one is of a black color, meaning that it is a dynamic address, modifying it doesn’t result in any observable change.
Others are clearly static, modifying 3/4 of them leads to restoring the original value, which meant that the 1/4 left is the parent, and the rest just copy its value.
00482538: Health that appear on the screen.
03682944: A promising address because it is not updated with the parent.
Health is stored in two different locations, which means one is nothing but a decoy.

I set the first one’s value to 1, and then got attacked by a monster.

The value that appears on the screen hangs at 0, and the character doesn’t die.
While the second kept decreasing on each attack, meaning that it effectively held the real value.
We need to inspect the memory region by selecting the value and clicking CTRL+B. 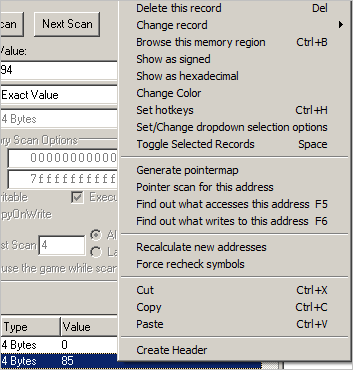 We can change the Display Type from Byte hex to 4 Byte hex.

This is easier to work with, I started searching for the closest pointer in a limited range, and it turned out to be 3682A24.

Notice that the Object’s health is empty, and that the struct holds a Backward and Forward link at its start.

The idea that saved me a lot of time!
CHEAT CODES, I was both happy and shocked to find out that they really existed!

DOOMWiki includes messages that appear on detection of each message.
Two commands were exceptional because of the information they manipulate.

The magical keywords: “ang=” and “BY REQUEST…”.
The first one’s usage occurs in:

This is important and worthy to be added to our CE Table. 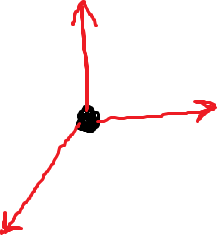 I knew that even if the enemy is on a different altitude: The shot still hits, and so I ignored Z.
X, Y and Angle on the other hand are majorly important because of distance calculation and angle measurement.
The values they held look weird, are they floats?

No, doesn’t look like it. All I knew for now is that the view changes upon modification.

Moving on to the second:

We can see that it only passes execution to sub_420C50, and that’s where the magic happens.

We can see that it traverses a list of Objects, starting with [484CFC] and ending if the Forward link(+4) equals 484CF8.

“Did anyone do this before?”, I wondered.
So I searched for:

And well, I found out that the source code was available.

At first I was mad, because I spent about 3 to 4 days to get the results previously stated. But, hey! I needed more information anyway, and this was an easy road showing up.

So the structure we look for is defined in d_player.h, the interesting element’s name is mo.

The target element is interesting, it supposedly holds a pointer to the Map Object being attacked!
Calculating its offset isn’t that hard, because we know that Health is at 0x6C.
FIELD_OFFSET(mobj_t, target) = 0x6C + sizeof(int) * 3 = 0x78.
The following line in r_local.h indicates that there’s a lookup table/function for Angles, explaining why there’s weird values therein.

It’s time to see what the target element holds for us! 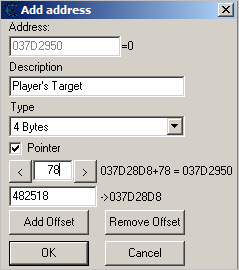 Since I just started up the game, its value is NULL.

Attacking or getting attacked by a monster leads to a value change.

But there is no update after killing the monster, hmmm. 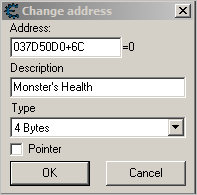 The health is the only indicator of death if it is <= 0.
And that’s not the only problem:
Attacking a second Monster doesn’t result in any change occuring.
Since I want it to be regularly updated, I had to find a way around it.
I restarted Doom95.exe, selected the Pointer to Player’s Target and: 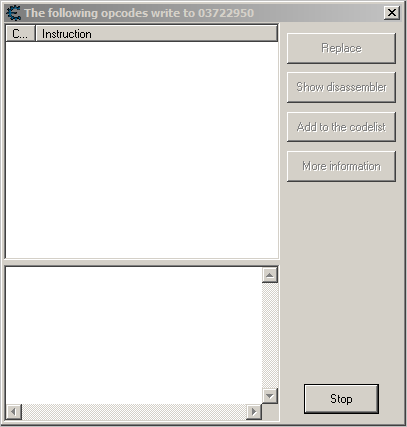 We can now start fighting an enemy:

This is the instruction responsible for writing to the Player’s Target element.
Going back a little in disassembly window, there are some simple checks:
Is the Target NULL? Is it equal to the Player itself?

Last piece of the puzzle

Monsters could accurately aim at my character.
I knew a function responsible for angle measurement existed, I just had to find it.
After a few hours searching, I ended up looking in p_enemy.c;

A collection of interesting functions!
P_AproxDistance()
P_CheckSight()
And the most promising one:

R_PointToAngle2(), and its definition is the following:

I knew the Player’s X, Y were read right before invokation. I used this information to trace the calls and watched for accesses:

Once a monster aims at us, we get results:

The second one looks like the thing we’re looking for!

It prepares to call 0042DB10 by loading the Target in EAX and storing its (X, Y) coordinates in EBX and ECX, while EAX and EDX hold those of the monster.
We can deduce that it is a __fastcall.
Disassembling the function shows:

!
With that in mind, locating this function is made easier.

Looks like it, it starts by returning if Target is NULL, then ANDs [Monster+0x68] with 0xDF. What’s sad, is that I was looking at it since the beginning in CE, welp

All that we’ve learned about the game will allow us to start wrapping things in C++.
Let’s create ADoom.h:

I’ll create functions that read(rM)/write(wM) to the process memory by extending both the header and source file.
We are going to use two WINAPI calls for that purpose: ReadProcessMemory() and WriteProcessMemory().

The Doom95.exe process crashes, success.
We have to apply the 2 byte patch and keep an eye on the Player’s Target value.

So far so good, we are making progress.
At first, I totally forgot about the Health check, and it kept aiming at the dead Monster.

It is time to use our knowledge about A_FaceTarget(0041F670).
It takes an mobj_t * argument in EAX, and performs a single check(EAX->target != NULL) before calculating and storing the correct angle, this is a minimum of work on our side.
All is left to do, is creating a reliable function and storing/running it in the remote thread.

We can compile the executable and load it up in IDA.

–
Hex-view is synchronized with Disassembly-view, so selecting the first ‘mov’ is all we have to do.

That is our function!

With that done, we need a location to write it to, it needs to be Executable/Readable and Writeable too.
In order to get it, we will call VirtualAllocEx().

We have to specify flProtect as PAGE_EXECUTE_READWRITE.
Another helper function will be called aM short for allocate Memory.

And then there should be a function to spawn a Thread in Doom95.exe process.
We’ll be using CreateRemoteThread(), and wait for it to terminate using WaitForSingleObject().

That’s all we need, now we can implement the whole loop:

It took many attempts to get to the final product, but it certainly was fun!
I could not include pictures or GIFs from the game because I didn’t find a way to do it, for that, I apologize.
Lots of modifications were made to guarantee reliability, an example would be the Player object is updated on two events: Death/Level Change.
And I also got rid of some functions such as:

I didn’t even need to include <cmath> in the end!
NIAHAHAHA!
~ exploit

This is really creative stuff, you always kill it with your articles, keep it up man

You’re going to go so far in this world, there are few people like you.

Thank you so much, I’ll do my best

!
I’m really happy I found the time to write this

.
About time you wrote a new article

I know, it took forever @ricksanchez.

And thank youu, really happy you liked it!

This is some pretty fucking cool stuff @exploit, good job!

One of the best gamehacking sheet I’ve ever read !